This tribute was created by The Targaryen of District 4. Do not use this tribute without her permission.

He is a tribute of TTOD4's Last Era.

Motives for Winning: To find out his real identity, get revenge on the corrupt Peacekeepers that forced him into the Games and to buy a lifetime's supply of coffee with his riches. 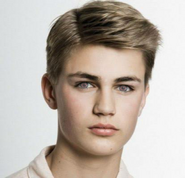 Ace is a very sarcastic, intelligent and witty young man, capable of coming up with cynical quips and jokes that people wouldn't think came from someone of his age. Although he has the appearance of a thirteen year old, his mental age is that of a wise, worldly adult. How he has amassed a wide range of knowledge of various subjects, especially his knowledge of handling guns, is a mystery. It's implied that he could have killed people in his past.

In fact, he is an individual shrouded in mystery. He has selective amnesia, making him unaware of his real identity but keeping his knowledge intact.

There are other aspects of Ace's personality that suggests that he may have retained at least a part of his youthfulness. He has a mischievous streak, especially when he is proving someone wrong or he knows that the circumstances are in his favour and he has an affinity for coffee -- which is quite the luxury in the district he was found in (8).

Ace's past is unknown. It's not even known if District 8 was his home district. By looking at the first hint towards his identity, his clothes, it could be assumed that he was from a wealthy family.

When Ace finally woke up, it was a particularly turbulent day in District 8. There had been an explosion in one of the district's textile factories. The majority of the victims that needed urgent medical attention were brought to the hospital.

Therefore, Ace wasn't their main priority. However, there was someone who was worried about him; a young nurse named Iaso. Because of her frequent concerns about Ace and how she felt he was being neglected, she was assigned to him.

When he finally woke up, Iaso was surprised but relieved. Days later, she proceeded to ask him questions in regards to whether he remembered anything prior to being in the hospital or his identity. With the chaos of the explosion and the lack of resources due to the district's abject poverty, they hadn't been able to keep track of all the arrival of the patients. The identity of the person who brought Ace into the hospital was unknown.

It was also determined that he wasn't a victim of the explosion. Realising that asking an amnesiac questions that she would not get the answers to, Iaso switched her focus to helping the boy recuperate. She brought him coffee, which he grew an affinity for, and she liked to play card games with him.

"Do you know what we should do? We should give you a name."

"I don't remember my name."

Ace was initally skeptical at first, thinking that being named after a playing card was weird. However, he warmed up to it because Iaso told him about how "Ace" had a lot of different meanings -- especially its usage as a compliment. Appreciating this gesture from his only friend, and because he liked the idea of being complimented every time he was addressed, Ace learned to accept his new name.

When Ace had fully recovered, he was time for him to be discharged. Sadly, his farewell would be bittersweet. As he was packing up his things, which was now the playing cards and jars of coffee as well as his clothing, and saying goodbye to Iaso, Peacekeepers stormed the hospital. They declared that they had a search warrant and they were looking for one of the patients. When asked to show this warrant or proof of it, the Peacekeepers shot the staff dead.

The shootout caused the hospital to erupt into frenzy. The Peacekeepers reached the floor that Ace was on, having found their target. Iaso could have chosen to run away, but she stood in front of Ace and protected him. She refused to let the Peacekeepers take Ace, telling him that they were corrupt.

Iaso was killed and Ace was forcibly taken. He was interrogated by these Peacekeepers, who were accusing him of murder. Although this could have potentially been the next clue as to who he really was -- the first being his clothes, Iaso helped him to recognise that these Peacekeepers were corrupt. He realised that they wouldn't give him any information.

He asked them what his punishment was.

His punishment was to volunteer for the Games.

Weaknesses: Is much more proficient with a handgun, which is normally forbidden in the Hunger Games, than any of the weapons provided in the Games, hand-to-hand combat (he relies on long range combat and/or his speed in order to distance himself from his opponents), his amnesia, his attitude (some may dislike his cynical and witty nature).

Note: This will not apply to every Games T/N has been submitted into.

Reaping Reaction: Ace's reaction will be that of indifference. He doesn't want people to make a big deal out of him volunteering. It's something that he has to do and he's confident that he has the intelligence to win.

Train Rides (if this section is added): Ace will spend his time on the train looking for coffee.

Chariot Parade (if this section is added): Ace will feeling nothing but indifference to the chariot parade as well. He couldn't care less what people think of him. If he manages to capture anyone's attention, he'll hope that they sponsor him and send him gifts whilst he's in the arena - preferably coffee in a flask or anything he can use to make coffee.

Group Training Strategy: Ace will practice on the throwing knives station or on the archery station, the latter he believes is close to a handgun.

Private Training Strategy: Ace isn't looking to get an extremely high score. He'll settle for a 7 or an 8.

Interviews: Ace could play the witty, intelligent child angle to his absolute advantage. If the questions are focused on his past, he'll talk about Iaso and the times they drank coffee and played card games together.

Games Strategy: Ace's main strategy for the entirety of the Games is to switch between different areas of the arena, surprise attacking other tributes in order to steal their supplies. If anyone attacks him, he'll take them out with his throwing knives or any weapon he has, even if he doesn't have experience with it. He may rely on sponsors if he runs out of supplies.

Showmance: Ace will not be in a showmance.

This section features a few of the Games that Ace has been in. Only Games that had a conclusion will be listed here.

The meaning of Ace is "highest rank". 'Ace' is commonly used to describe someone who excels at a particular activity.

Avenir means "future" in French. It could be a reference to Ace's inspiration, Number Five from the series The Umbrella Academy.

Retrieved from "https://thehungergamesrp.fandom.com/wiki/Ace_Avenir?oldid=234711"
Community content is available under CC-BY-SA unless otherwise noted.