Appearance: Aimee has light purple hair with a dark purple streak in the bangs. She has lavender eyes that seem empty with thought. She seems to have a lot of scratches on her hands.

Personality: Aimee is a strong determined girl, She is used to being put under plenty of stress and handles herself well while under it. Her Intelligence is unrivaled and one look at her fills you with determination.

Backstory/History: Aimee came from a Doctor Family. Her father was a Doctor, Her mother was a Doctor. It wasn't long before she was training to become a Doctor as well. Since 5 only had one Hospital, Most doctors ran small clinics in their home. Aimee's family had enough money to open a clinic of their own, a rarity. People would come in with anything from a broken arm to a factory part lodged in their neck. Any degree of danger and injury, the family would fix it up. Aimee would always help her parents, and eventually helping turned into training. The clinic where she grew up became a training grounds. It wasn't long before she wielded a scalpel, along with any other medical tool with ease, and was able to perform simple surgeries and heal simple things. The older she got, the more she progressed. She only ever had one patient die on her, as there was nothing her, nor her family could do to save her. She could never forgive herself for that, as now that woman's daughter was growing up without a mother. That happened when she was 17, She threw herself into her work to become the best Doctor their was. She began studying what killed that woman; The Heart. Her study was interrupted though, as she was reaped.

Interview Angle: Aimee will simply be herself. She isnt much for acting.

Bloodbath Strategy: Aimee will do what her alliance wants.

Games Strategy: Aimee with act with her alliance, fighting their enemies and acting as her allies' Medic.

Token: A page ripped out from one of her Medical Books. It seems to be about Heart Tumors. 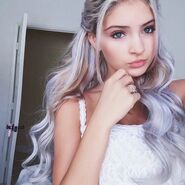 Anime
Add a photo to this gallery
Retrieved from "https://thehungergamesrp.fandom.com/wiki/Aimee_Alexandria?oldid=191437"
Community content is available under CC-BY-SA unless otherwise noted.