This guide will help you make your own arena. It will includes examples for settings, arena events and muttations.

This is the landscape of the arena. Some arenas may stick with one consistent setting whilst others will incorporate multiple settings. Some people like to have picture references of their arena and muttations, whilst others prefer to describe these aspects. Some might even create a map of the arena. Go with whatever option sounds best to you. Examples include:

If you decide to only have the description of an arena, don't forget to include which direction the sceneries are located in (Eg: There's a lake in the North West and a river towards the South...)

The arena is mainly set in a jungle. The Cornucopia is based in the middle of the arena and is set on dry rocky ground. Most of the area surrounding the Cornucopia is full of trees except for one little section which forms a dirt path. These trees also form perfect homes for jaguar mutts, though these are more common in specific regions.

The North region is home to two notable features: A large hill and a mountain range. The hill itself is steep and awkward to climb, but it provides coverage for most of the surrounding area. There are three mountains in the North surrounded by rocky and muddy terrain. There is also a river which runs from one of the mountains. They are more difficult to climb than the hill and if you fall, you are more likely to die. Mastering these mountains leads to the reward of shelter, a decent lookout point and fresh water from the river. This region doesn’t have any mutts.

If you head East, the first thing you’ll see is a river. It's the same river that came from the mountains but the water here needs to be purified. It does, however, come with the added bonus of fish. Most of these fish will be edible and safe to catch, but beware of the piranha mutts: They pack a pretty nasty bite. Further in the East, you will find a shipwreck. It might be home to treasure or useful supplies. It can provide some shelter from the rain, though whether it’s stable enough to stand up on its own is an entirely different matter…

The only noticeable feature South is a plane wreck. Though it isn’t home to much, it can still provide hiding spaces for the tributes. Unlike the ship, it is sturdy enough to hold up against most arena events. Be weary of jaguar mutts in this area: They are most commonly found in the Southern region. The West region only holds a cave system. Some are dark and cramped whilst others are cosy and light. They can provide decent shelter for the tributes, but they are also open to attack unless the tributes can hide the caves well. Some of the caves have tunnels barely wide enough to fit a tribute. These tunnels could provide escape routes for tributes. Fire ant mutts lurk within these caves and might cause some non-fatal irritation.

With the exception of the North region, the outside of the arena is home to a beach and a small stretch of sea. The seas might be able to provide tributes with some fish, but other than that there aren’t any other benefits to the beach. The beach is a natural habitat for cone snail mutts, but don’t be fooled by their appearance: They are more deadly than they appear. 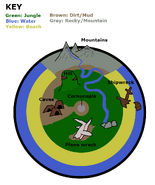 Arena events can be natural disasters triggered by the gamemakers. Additionally they can also be announcements which are intended to bring tributes together. They can last for one day or for multiple days. These are usually kept secret until the day the event occurs. The only exception is the bloodbath, which is almost always in games unless otherwise specified. Examples include:

These are genetically modified creatures who may help or hinder the tributes. The muttations might be described alongside the arena or they might have images to represent them. Some users might choose to keep their muttations a secret until they make an appearance. Examples include:

Retrieved from "https://thehungergamesrp.fandom.com/wiki/Arena_Design_Guide?oldid=233210"
Community content is available under CC-BY-SA unless otherwise noted.