Auburn Friday is owned and created by Nightlock Kryptonite, please refrain from using er without my permission. She is a patchwork tribute from random items I won at the Auction page.

Do not use any of this coding on this page without my permission. I will know if you do. 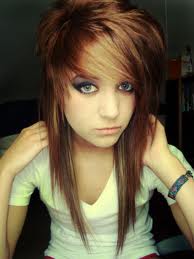 Personality: Auburn is very shy. She's rarely seen anyone who wasn't family and is still very stuck from the death of her mom and brother. Auburn, in fact, hates to meet anyone because she doesn't want to end up losing them like her siblings. To do this, she's also very quiet, rarely speaking louder than a whisper. She'd do whatever she could to not make allies, but she isn't quite sure. She'd love having allies, but not to watch them die. One last thing, Auburn is very smart as her dad has taught her very well. She could easily solve any math equation without having to use a piece of paper, but she somewhat struggles with reading. Auburn knows how to read, but isn't the fastest.

Reaping: She was reaped.

Weaknesses: She is very shy and is bad at socializing, she has very poor upper body strength

Alliance: Loner or the 5 male

Token: A locket with a picture of her mother in it

Bloodbath Strategy: She will run into the bloodbath (with her partner) and grab the closest backpack or weapon and then get straight out of there, avoiding everyone and sticking to the 5M and never looking back. She will hide at the edge of the cornucopia and if she sees a young tribute about to get killed then she will intervene with her slingshot and save him/her

Games Strategy: She will make a base camp and hide there for the duration of the games, even though it isn't a smart idea, she is too scared to just wonder into the unknown. She will set up traps around her camp to secure anybody who comes past and then she will chose to ally with them or kill them, it depends on what they try to do. If she makes it to the feast then she will not attend and she will just stay where she is because going to the feast would be a death sentence.

Reasons for winning: To see her father and family again

Back-story: Auburn has a late mom, dad and three other siblings. When Alex was 4, her mom gave birth to her sister. However, during the process, ended up dying which caused her family to all grieved a lot. Her dad was barely able to keep her sister alive, constantly forgetting to feed her or put her to bed on time. Due to this, Auburn's big-brother with the help of Auburn herself, would have to care for her. Before her mom's death, Auburn used to be a fun, happy, excited little girl who'd love to play with her friends. However, after the death of her mother, her heart weakened. She became very quiet. Then, when she turned 7, Auburn's younger big-brother was discovered to have AIDS. The other family members were checked to see if they have AIDS, but nobody else has. The whole family was effected, even the little, 3-year old sister. Auburn dad became extremely independent. The other siblings were extremely upset and would do whatever they could for the brother, but they all knew he would eventually die from the disease. When Auburn was 10, her  big-brother finally got out of his misery and died. Auburn's dad completely freaked out and went insane. He eventually regained himself and started to be a parent to his kids. He'd home-school them, making sure he could love every moment he had with them because one day, they'll go. The kids themselves became very secured and Auburn was barely about to go outside without her dad. She became quiet too, much to scared about what her dad is turning into. But, as it turns out, their dad was an amazing teacher. However, before Auburn was able to become amazing at reading, she was reaped. Once again, her dad was creeped out and crying

Retrieved from "https://thehungergamesrp.fandom.com/wiki/Auburn_Friday?oldid=235415"
Community content is available under CC-BY-SA unless otherwise noted.