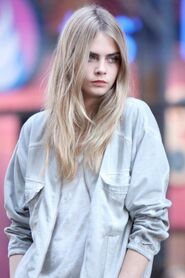 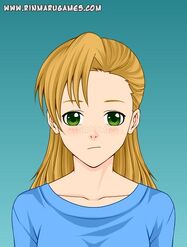 “If a fire burns you once, don't let it happen again!”
―Bree

Brielle "Bree" Lillian Richmond' is a tribute belonging to Thalia. I ask that you do not use, edit (unless it's adding/removing categories) or take any info without permission. Doing any of the following will result in punishment. Typically, Bree's district partner is Ostadar Iris. The two have no relation to each other, meaning that they do not need to be entered in Games together. She is currently complete.

Name: Brielle "Bree" Lillian Richmond. Bree didn't take her fathers surname when she was adopted. Instead, she was given a random surname.

Weapon: Bree actually doesn't know how to use weaponry. Really, She'll use whatever she can get her hands on. More specifically, a bow and arrow.

Alliance: She'd go with just about anyone that's not the careers. Bree's two main choices are with people from Outlying Districts or the anti-careers. As a final choice, she would ally with one or two trustable tributes.

Appearance: Bree's hair is dirty blonde. It's naturally straight but she curls it often. Almost always, it's left down. Bree's often playing with her hair when her hands have nothing to do. She's used to always doing stuff with her hands, so it's pretty odd for Bree to have nothing to do with them.

Bree has emerald green eyes. They're probably the least noticeable feature about her, but the most comforting feature. One look into them and you'll feel safe and sound.

Her skin is lightly tanned unlike most blondes, but not that much. It's covered in a freckles that are on her nose, under her eyes and on her forehead.

Bree looks one or two years younger than she actually is. She doesn't consider herself very pretty and it's the same thing with most boys.

Strengths: Bree knows the way weaponry works. Sure, she's never used it. But do to designing it she's sure she can do it. Also, Bree's very trustable and can figure things out easily.

Weaknesses: All she really know about weaponry is how it works. So really, Bree knows very little about how to use weaponry. For two final weaknesses, she can't swim and is not very fast.

Personality: The few people Bree knows say she's the nicest person in the world. She doesn't agree with them but sometimes it seems true. An example of this is how Bree can't remember a single time she'd hurt someone.

Bree is really outgoing. It's almost impossible to make her mad at you. This can get Bree to be very talkative at times and will sometimes get on people's nerves. However, if they told her she was annoying she would instantly stop and try her best to be quiet.

Another thing is her honesty. Bree's very open about her thoughts unless it would hurt the person she's speaking to. The only problem about her honesty is that if it helped someone, Bree would rat out anybody.

Overall, Bree is a very kind person. It's hard to find flaws with her but there's many. One is that she's often taken advantage of. Bree doesn't mind it (unless it's her "father"), though she thinks she's just helping someone out.

Another flaw is her clumsiness. She falls a lot, as she has a bad habit of dragging her feet. This is a trait bullies criticize her about. When she was younger and that happened, Bree would usually run off crying. Now she spends most of her time inside, so the bullying rarely happens. However, if she does encounter some of the people who bullied her, she'll usually try her best to ignore them.

I have dreamed a thousand different dreams.

Once upon a time, I was a princess, fair and true. In my castle I would sit, staring out from my balcony with waves of gold cascading down my shoulders. A frail hand outstretched, I would beacon a young prince to stand in my presence. He'd call for me, waving with a smile laced in a delicate amount of sensuality, and I would find a blush upon my cheeks. I'd turn from him, dress billowing in the breeze. With arms spread wide, I'd damn the consequences of living, and with an inhale, I'd let myself fall from my balcony. In the arms of he who'd love me forever, I would forever remain.

Once upon a time, I was a faerie, fragile and just. In my forest I would flutter, painting my lips with the ripest of berries. Wide, green eyes would blink sheepishly at the sky, fickle fingers touching the clouds and swirling them into a masterpiece of euphoria. A hunter would watch me in the distance, weapon in his hand and his eyes narrowed. He'd steady his aim, but with a turn and a blink of my eyes, he'd find himself ensnared. He'd drop his duties and take me in his arms, his lips finding mind within an explosion of forbidden ecstasy.

I'd dream of castles and forests, men who'd love me, only to awake with nothing but the bitter truth resting against my lips. I was not a wanted fair maiden, no. There was nary a man who longed for me, and never once did I feel as beautiful as I did once, once upon a dream. I was just a girl; I was girl locked in a tower, yet never once rescued.

My first memories came from within the orphanage of The Capitol, children heckling both me and my clumsy feet. They'd cackle as I tripped, the officials too busy with their little lives to defend me. I'd run to my room and cry, too weak and too pathetic to ever act out in rebellion. Still, in my pained state, I would draw magnificent pictures. I'd draw the delicately curved bows and sharpened arrows from my dreams, closing my eyes and imagining the pointed beauties piercing the hearts of all who neglected me.

Once upon a day in agony, where I doodled in a corner, a man noticed my work and, with a devilish smile, remarked:

"Sweet child, did you make these?"

"Shh, no need for apologizes. Child, these drawings, they're..."

"Awful? Sor... Um, forgive me. All the other kids make fun of 'em. I'll go to my room and leave you alone, if they bother you?"

"Awful? Bother me? Sweet girl, they're marvelous! You have a talent!"

"Yes! I could see these on the walls of all the best centers for training in the Career Districts!"

"I know so. Sweet girl, can I ask something?"

"Would you want a family?"

"You and your lovely little fingers, of course!"

"You should go pack your bags, that's what."

I was whisked away in a day's notice, poisoned by dreams of finally having a family who'd appreciate me and a surname that actually held meaning. Even then, with a thousand attempts of pinching my flesh, it was all just a dream. The man hardly took the time to introduce me to my new family, and shoving me into a room, he told me to start drawing. "Have you talked to the officials, daddy? Do I get your surname?" I'd question with each drawing I'd pass over, but he'd just wave me off distantly as his greedy eyes consumed the drawings.

"Oh, no, not yet. It's of no matter, though. You don't need to have my name to be my daughter. Besides, Richmond suits you. Bree Richmond, yes. Has a nice ring!"

"You should get started on another design, that's what."

In all sick truth, "father" was right. He'd rush into my room every now and again, smiling and shouting:

"The factory accepted your design! Your bows will be hanging on the walls of the finest academies in no time!"

"Are you not happy?"

I had a dream that I could be a girl that was beloved, and even upon becoming a top designer of weapons within my district, it seemed that no one knew my name. Locked away in my house, I was just "that adopted girl who spends her days drawing", and never once was I allowed to go out with my "father" to partake in things that normal families do. "You're too busy," my he would purr, dropping a plate on my bed, eyes gliding over my work. "Maybe next time."

I was a girl adopted, finally given a family, and yet I'd never felt more alone. With each waking moment, I found my imagination shifting the forms of the bullies from my childhood into the man that supposedly "saved" me. With each bow I crafted, with each arrow I drew to perfection, I dreamed of seeing it shatter his skull.

But, that was just what it was: a dream. I was not a girl beloved, nor a girl with a family who'd hold her close. I was not a princess, fair and secure. I was not a fairy, wanted and brave. I was just a girl, stuck in a world of a thousand dreams.

Once upon a dream, I dreamed of having a family. That was never to be true.

Once upon a dream, I dreamed of finally being brave. That was never to be true.

I was a weak, unloved girl, used in every meaning of the word. That, my friend, was true.

Bree's Adoptive Father
Add a photo to this gallery

Retrieved from "https://thehungergamesrp.fandom.com/wiki/Bree_Richmond?oldid=184170"
Community content is available under CC-BY-SA unless otherwise noted.