Brighton Honeycutt is a tribute made by Xax. Please don't use Brighton without his permission.

“We rise by lifting others; to become the ultimate-you, help the others be their best selves.”
―Brighton 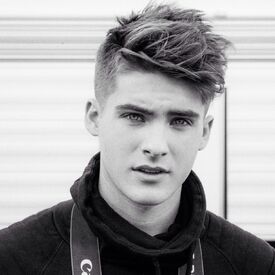 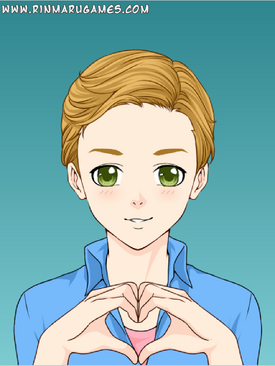 Appearance: While most people wouldn't refer to Brighton as handsome, they would, however, consider him as cute. He's got boyish features in a somewhat mature face for his age. He's seen smiling most of the time. His signature smile includes a pair of dimples at the sides and a dorky hint to it. He has some physical quirks like sometimes blinking too much, winking randomly at people when happy and tilting his head to the side and/or exaggerating the arch of his eyebrows when confused, all of which make him all the more adorable. His frame is right in between an athletic one and a natural slim one, as attending to the Career training center has made him be in shape, but his age impeding him to be completely ripped. His nimble figure permits him to climb trees, hide behind places, and in general, be stealthy. He's always well-dressed and rarely wears any type of blatantly informal clothing.

Personality:  Brighton is a really positive and dorky individual. Bringing his spirits down is almost impossible (heartbreaks being an exception to this; more on that later) and he never is afraid to make a fool out of himself as long as it makes other people feel better. He is extremely patient and believes in both second chances and that there is always at least some good in everyone. He also wants to make people the best version of themselves by telling them how they could improve.

Brighton is quite selfless and always likes helping people as long as he doesn't get in any danger by doing it. He's very analytic and not reckless at all. He always thinks things through twice before going on with them. Brighton loves to make puns, tell jokes and in general, make people laugh and have a good time. Besides, he's always careful with his words and is a very educated and proper young man. He is always polite, sweet and tends to give people compliments without getting to the point of being a lickspittle. He tends to have this thing that makes people feel pity for him and/or make them instantly like him just from his dorkiness.

Brighton isn't great with leadership skills but also isn't a submissive person or a follower. In those cases, he tends to keep his opinions to himself and act upon them or only to share them with his trusted people. Brighton is really self-sufficient, disciplined and controlling of his emotions, except when it comes to love.

Brighton is a hopeless romantic and he tends to be really corny when romance comes as a topic. Somehow, he manages to give great love advice to other people, but can't seem to find what to do with his own love life. Even if he seems like the perfect boyfriend, his previous girlfriends have gotten bored of him after some time and left him heartbroken over and over again. Only heartbreak can make him feel down or self-conscious. Once, he even attempted committing suicide from a heartbreak.

Training Strategy: To be determined depending on the games.

Private Training Strategy: To be determined depending on the games.

Interview Angle: To be determined depending on the games.

Bloodbath Strategy: To be determined depending on the games.

Games Strategy: To be determined depending on the games.

Brighton's tender muscles tensed inside his body, and he knew that they'd be done for good. Just like last time... And the time before that.

As if on instinct, Brighton tried covering his body. Why did he always become so devoted to people? Why did he trust them with his heart only to be bound to getting it broken every single time?

The third was supposed to be a charm, but for Brighton it seemed to be a curse. Later on, that night, he messaged Valentina, his first love ever, and one that he really never stopped loving.

As always, she didn't message back. He then tried messaging Deralia, only to find out she had already blocked him everywhere.

Why did Brighton have to go through this? He was a good kid. A positive one. An intellectual one with no reckless tendencies. Maybe it was that. That he did not risk enough. But he did everything to please his lovers, to the point of offering his most sacred thing to him to Valentina as long as she was satisfied.

Since the offer took place after their break-up, Valentina saw Brighton as a pervert and stopped any sort of contact with him, to the point of throwing away the half-charm that he had given to her when they were a thing.

He kept the other half, but together, they formed a heart/shaped charm with "V + B" engraved on it.

He probably did not deserve this or maybe he was mentally too mature for those girls. Maybe he had developed a sage and healthy love at a young age.

He even wondered what being with guys was like. He started going out with a guy after breaking up with Deralia, but with fear creeping in his mind and his skin crawling every time the boy tried to touch Brighton, he ran away and lost touch.

By then, Brighton decided that he'd commit suicide. He suffered too much and tried too hard. He gave too much and received too little. It was unfair.

That day was the one before The Reaping. Upon noticing that committing suicide would bring disgrace and misery to his family, he decided to put in his name for as much tesseræ as he could.

The next day, someone else was reaped, which was even better. Brighton volunteered and that made him look braver. If he died in the games he would be out of his misery. But he would try his best to win, for if he did, no one could resist a Victor. And that was exactly what he was going to be.

Hopefully his thoughts were correct and someone would stay with him forever, as that was his only wish.

Retrieved from "https://thehungergamesrp.fandom.com/wiki/Brighton_Honeycutt?oldid=237234"
Community content is available under CC-BY-SA unless otherwise noted.