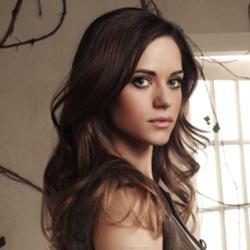 Chloe Black is a career tribute created by Career99.  Please don't use this tribute without asking creator's permission. This tribute is not finished yet.

Personality: She is cruel, so she isn't afraid to kill at all, self-confident (but not arrogant, she won't underestimate anyone), tough and stubborn, revengefull, brave, evil, loyal to her allys (she would never betray them, but if someone betrays her, she tries to kill them.), She has a bad temper, but she has learned to control it and she doesn't let anger take over. She doesn't show her emotions so she can hide her anger well. She doesn't trust anybody. Her humor is sarcastic. She won't let anyone to boss her around unless it's nessesery to keep the alliance together.

Competitive spirit: She wants to win to show her skills of and bring pride to her district.

Dislikes: Dumb and annoying people, people that try to boss her around.

Backstory: Her parents died in a mining accident when she was only 3 years old, so she doesn't remember them at all. Since that she has lived in a boarding school, which trained children for The Hunger Games. She started training in the age of 7. She has a natural talent in knife throwing and swordmanship, and she is also good in hand-to-hand combat and she knows how to use every other weapon, but she does the best with knives and swords. She didn't want friends to distract her training, so she was rude to everyone. That's why her fellow students didn't like her and teased and annoyied her. She has a bad temper, so she got easily mad and attacted them. After she beated up a few good fighters, people learned to not annoy her. She has always wanted to be in The Hunger Games, and she thought that 16 would be a great age to volunteer, not too old but not too young.

Fears: Can't save an ally and he/she dies.

Alliance: The careers (if she thinks they are good enough and if they want her to be their ally).

Nickname given by the Capitol audience: Fearless

Training strategy: Shows of her skills with weapons, form an allience with other careers, look out for skilled tributes=threats. Laugh at weaklings, make them scared.

Individual Training Sessions: Shows of her knife throwing skills, swordmanship, speed and climbing. Like Clove, when she throws knives, she never misses.

Interviews: Brave, ruthless, sarcastic (makes fun of the other tributes), smart, tries to get sponsors by flattering the Capitol.

Bloodbath strategy: Runs to the Cournicopia to find swords and knives and other supplies, fights with the careers (if they are her allies, otherwise try to take them out)

Feast strategy: Goes to kill and to get food/something else.

Rest of the Games strategy: Sticks with the careers until there is about 10 tributes left, then leaves at night. Just tries to win.

Chloe as a victor.
Add a photo to this gallery

The Disaster Games by Kman528:

Odds of winning: 7-1 (the best odds of all the female tributes)

In these Games, she participated as District 13 female tribute.

How died: Throat slit with a sickle by Amana Grayler on the 4th day.

The Thirst Games by Andy1854

How died: Hand cutted of with an axe by Lemonade Icyna on the last day.

Planned victor of the losers round, when all the death tributes fight (never finished)

The Victor Games: All Great Champions Must die by LydiaMartin1

The Disaster Games by Kman528

The Thirst Games by Andy1854

"When I kill someone I want them to scream, something that the Capitol will remember me by, the girl that mad people scream, or the girl that showed mercy to no one, that's what I want." in Disaster Games by Kman582 (shortened from the original version)

Retrieved from "https://thehungergamesrp.fandom.com/wiki/Chloe_Black?oldid=152637"
Community content is available under CC-BY-SA unless otherwise noted.