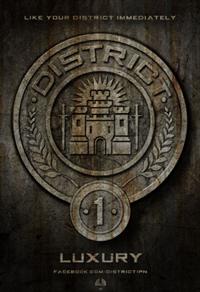 District 1 is one of the 16 Districts of Panem ruled over by the Capitol. It is one of the richest, if not the richest, Districts in Panem. They provide the Capitol with luxury items and as a result, have a generally favorable relationship with the Capitol. These luxuries include diamonds and other precious gems, such as emeralds and sapphires, along with gold and silver. The names in this District often reflect this, and thus produce glamorous names.

Like Districts 2 and 4, they are also well known for their Career tributes and training academies. These tributes are often well trained, very strong, and feared by most tributes. District 1 seems to usually have the most aggressive Careers.

Victors from District 1 usually win their Games through their training expertise and the career alliance. Some of District 1's victors include:

The tributes in District 1 tend to get sponsors as they are usually a part of the career alliance. Some of District 1's tributes include:

Retrieved from "https://thehungergamesrp.fandom.com/wiki/District_1?oldid=233997"
Community content is available under CC-BY-SA unless otherwise noted.