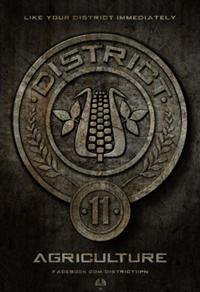 District 11 is one of the 16 Districts of Panem ruled over by the Capitol. Their industry is agriculture; orchards, fields of wheat, and cotton surround the district. Almost everything they grow goes to the Capitol, despite their starvation. Its inhabitants are described as having dark brown skin The District is one of the largest, in both terms of population and land, along with being one of the poorest Districts. The Peacekeeper presence in this District is heavy, due to the importance of food production, and its regional government is known for being harsh and cruel. The citizens of this District seem to very rebellious.

The tributes of this District are often underfed, although this often assists them as they are able to go longer without eating. They also have a somewhat decent amount of survival instinct.

Victors from District 11 usually win their Games through their hunger resistance and ability to wield sickles and scythes. Some of District 11's victors include:

The tributes in District 11 usually don't get sponsors unless they show a lot of promise. Some of District 11's tributes include:

Retrieved from "https://thehungergamesrp.fandom.com/wiki/District_11?oldid=234008"
Community content is available under CC-BY-SA unless otherwise noted.