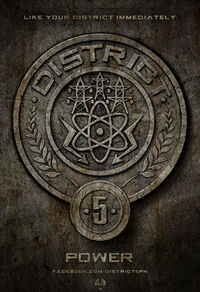 District 5 is one of the 16 Districts of Panem ruled over by the Capitol. District 5 is responsible for generating the power of the entire nation, and thus could be considered the true heart of Panem. They produce energy in many ways, including hydroelectricity, solar electricity, and steam energy.

Their relations with the Capitol are okay, but are nothing to write home about. They are, however, one of the less impoverished Districts, and the most wealthy Non-Career District.

Like District 3, the tributes in these Districts often rely on knowledge, not power. Which, of course, is ironic as their main focus is "Power."

Victors from District 5 usually win their Games through their intelligence. Some of District 5's victors include:

The tributes in District 5 don't usually get sponsors unless they show a lot of promise. Some of District 5's tributes include:

Retrieved from "https://thehungergamesrp.fandom.com/wiki/District_5?oldid=234265"
Community content is available under CC-BY-SA unless otherwise noted.