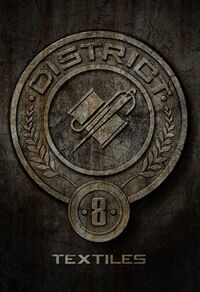 District 8 is one of the 16 Districts of Panem ruled over by the Capitol. Its main industry is making textiles and clothing. They have at least one factory that is primarily used for making Peacekeeper uniforms. The District has been described as "an urban place stinking of industrial fumes with no greenery, the people housed in run down tenements, barely a blade of grass in sight." District 8 is one of the poorest Districts of Panem, and also the most rebellious. Their relations with the Capitol are terrible because of this.

Like Districts 4 and 7, children begin working at a young age, often starting a shift after their school hours are over. This is due to the poor wages and low income in this District. However, the jobs in this District don't often never prepare them for what comes in the arena.

Due to the District being very urban, and not many outdoors type activities taking place, the tributes of this District often don't fare well against strong tributes, and don't survive on their own very well. However, there are always exceptions and this District has produced a few victors.

Victors from District 8 usually win their Games through their street smarts. Some of District 8's victors include:

The tributes in District 8 don't usually get sponsors as their relations with the Capitol is poor. Some of District 8's tributes include:

Retrieved from "https://thehungergamesrp.fandom.com/wiki/District_8?oldid=239332"
Community content is available under CC-BY-SA unless otherwise noted.