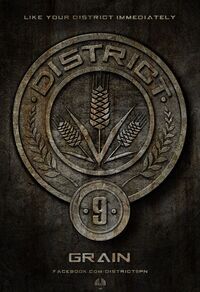 District 9 is one of the 16 Districts of Panem ruled over by the Capitol. It is responsible for grain production. It is mentioned that District 9 has many factories, most likely for grain processing. This District is very quiet and isn't heard of often. This District is fairly poor, but is considered lucky as it isn't bothered much by the Capitol due to being so low profile. However, the Capitol probably views the District somewhat favorably as the District has been referred to as "Panem's bread bowl, giving us the fertile harvest we need to keep rising as a nation."

Seeing as the District has many jobs similar to District 11, it's a safe assumption that the children of this District are employed to the grain fields just as they are in 11 to the harvest.

The tributes of this District have never been know to do too well in the Hunger Games, often dying early and quickly, usually in the bloodbath.

Victors from District 9 usually win their Games through their plant knowledge and ability to wield sickles and scythes. Some of District 9's victors include:

The tributes in District 9 usually don't get sponsors unless they show a lot of promise. Some of District 9's tributes include:

Retrieved from "https://thehungergamesrp.fandom.com/wiki/District_9?oldid=234006"
Community content is available under CC-BY-SA unless otherwise noted.