Eugene Watson is a tribute made by Xax. Please don't use Eugene without his permission. 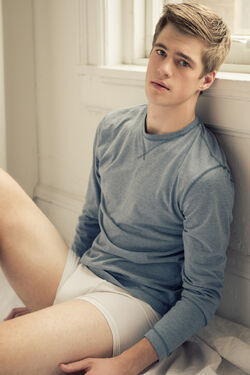 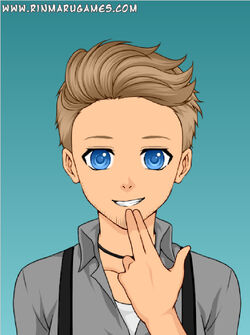 Appearance: Eugene is very good-looking. Or at least that's what almost everybody thinks. He owns a pair of almond-shaped blue eyes and has lots of straight and soft light chestnut hair to cover head. With a great jawline and very defined athletic body, many tributes either want him, or want to be him, if not both. He normally wears either a serious expression or a charming and cocky smile that defines him perfectly.

Personality: Geno, -as Eugene likes to be called- considers himself a career tribute. He's cocky and arrogant but in a humorous and almost amusing way. He's quite friendly, funny, sarcastic and ocassionally, when the oportunity is presented, Geno fills his sentences with innuendos. He tends to be a likeable guy, however, this tribute can be a stubborn hothead if provoked. Eugene is a master of revenge and has a lot of knowledge, which he applies when repaying favors to people. This makes him quite clever, sly and witty. He can get mad pretty easily if people don't listen to him or if they try to counterattack. Eugene is very verbal; he's very much of a talker.

Geno is a flirtatious and very opinionated person, he likes debating and proving his point to his teammates or friends. Even with this in mind, Eugene tends to be somewhat snobby at times and believes that he's more than other people when he's angry. Geno is a leader and he knows it. He sees most people as his workers, and his real friends as allies and partners. He has a weird disorder called IED (Intermittent Explosive Disorder) which may make him get extremely irritable, angry and aggressive for short periods of time if he is triggered by either too much noise, stress, arguing or disagreement. He's been able to make them less frequent and in some cases controlling them. His last Explosion was 2 months before being reaped, which is his record for now.

Training Strategy: Geno will definitely make sure he becomes the leader of the careers. He is sure that the male tribute from 2 and 1 will try to make the same, however, Eugene is confident that he'll be able to pull it off. He will comand the alliance to train in whichever he knows that will help them become more useful once in the actual games. As to himself, he will make sure to train his core, arms and improve his wildlife knowledge.

Private Training Strategy: To prove himself worthy of being the career's leader, Eugene will go all for it. He will grab the snake sword and fight against the holograms, making sure to mutilate them with the snake word and hopefully have the chance to choke one to death with the same weapon. Most probably Eugene will too have a fight to fight combat with an hologram and then twist the neck off to finish it.

Interview Angle: Eugene is quite excited for the interview. He will aim to be the Capitol's decadent sweetheart by showing off his charm, confidence and tell how unfortunate it was for him to leave his 'older sister' Amanda who was always there for him, and how her heart must be destroyed by the fact of him ebing in the Hunger Games. He will flirt with the camera for a bit and maintain the appropiate tone to his words according to what he is saying.

Bloodbath Strategy: Geno shall run as fast as he can towards the Cornucopia and grab either a machete or a snake sword (depending on which one he finds first) to slaughter any weak or lone tribute that comes close to the Cornucopia. Then he’ll make sure that his Careers control it as soon as possible.

Games Strategy: Eugene will put one of the strongest tributes, and most likely somebody trustworthy to take care of the Cornucopia for the first few days. Meanwhile, he and the other careers will strategically hunt down the strongest tributes at first, as the most careers there are, the easier it will be to take down strong targets. Once there are three or four careers left (including himself), Eugene will offer to take a night watch and meanwhile he’ll stealthily try to kill his companions left, making sure to at least kill one before taking some essential things from the Cornucopia and running of on his own and from then on, defending himself against the tributes who try to attack him.

The wind howled agressively through the middle of the night. Amanda Watson lied in the middle of the street, almost dead and recently abused by an unknown man. Her family soon found her and took her to a hospital, where she was taken care of and almost revived, as her blood loss had been outrageous. Amanda was very straight-forward, and as soon as she noticed that she had become pregnant while still a 17-year old girl, she told her family. Seen as a dishonor, they decided to hide her inside the house while her pregnancy continued, and then, their parents would adopt the child as their own.

And so they did, Eugene grew up with Amanda as a sisterly figure, while his grandparents were his parents through the child's eyes. One night, when Eugene was 12, Amanda decided to tell Eugene the truth about him. How he had indeed been, well, an accident. He didn't like it. He was something majestic. Not an accident. And he was very sure of it. From then on, Eugene had the fear of being sexually abused in any way. He didn't want any more accidents in his life. His own life and existence was enough. But this didn't lower his self-esteem; in fact, it somehow boosted it, as if wanting to show his family how even accidents could become splendorous. The Watson family was indeed very rich, and this was also a factor that contributed into making Eugene a bit snobbish and cocky.

He also had his good looks, and since he turned 12, some girls started looking his way. This made an almost free entry into the social world of popularity. He didn't mind it, to be honest. he just accepted it as it was. He was sure that he'd never be picked for the Hunger Games. He didn't need to put any more times his name for food. He had enough. Just four pieces of paper were put on the bowl where thousands of other small pieces of paper were held. He was very confident about his chances. It was his fourth reaping when it happened. When his name was pulled out and no one else of those stupid careers volunteered as tributes. That was the exact moment when his first Hunger Games started.

Retrieved from "https://thehungergamesrp.fandom.com/wiki/Eugene_Watson?oldid=237235"
Community content is available under CC-BY-SA unless otherwise noted.