This tribute belongs to The Wayward Daughter 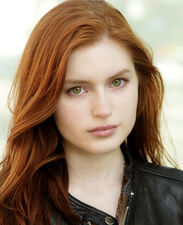 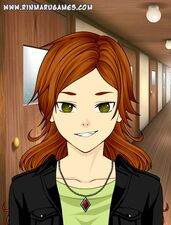 Weapons: Justine prefers to use throwing knives and daggers but is also somewhat proficient in using a hatchet.

Appearance: Justine stands above average height for her age at 5'10. She has red-orange hair that reaches past her shoulders. Like her twin brother, Justine has green eyes, but her eyes are noticeably more darker than Felix's from the weight of everything that she has seen. Unlike her brother, Justine is rather lean and limber.

Alliance: Justine will ally with Felix, otherwise she will go alone.

Personality: Justine is someone who thinks with her head and is headstrong. At times, she may appear vulnerable, but this is simply a façade that will disappear the moment Justine stabs you in the back. Unlike Felix, Justine is more serious and worried for her brother than the other way around.

Weaknesses: Justine is not physically strong for her age. She also is a terrible swimmer and has lost most of her memory of plant identification.

Fears: Justine fears that her twin will be killed and she couldn't prevent Felix's death.

One rainy day in District 15, two twins, Felix and Justine Leonard one blue haired and the other red haired were born to a rather wealthy couple. According to some people in the District, the two twins represented water and fire; like ying and yang. Without one twin, the other could possibly be lost without the other.

Unlike most of the district, the Leonard twins grew up through their toddler years in luxury and wealth. Until one day, when the Leonard family went sideways and wrong. At this point, Justine and Felix were around three years old when a strange knocking came at the door of the Leonard mansion. The twins, being the little naïve children they were, answered the door to find the Mayor and several accomplices by his side.

Even though Felix showed no concern that the mayor would be of any danger to the Leonards, Justine was already thinking through the worst possible situations that could happen. Even though the mayor seemed to let his serious guard down, Justine wasn't sure. Once the twins made their way upstairs, Justine voiced her concerns.

Eventually after an hour or so of arguing and waiting upstairs, Felix decided to look over the railing. When he returned to Justine, his face was as pale as a ghost. When Justine got her turn to look over the landing, she gave off a slight scream at the sight of her parents dead. Eventually the twins made their way downstairs where Justine was still worried about getting killed.

"Felix, what are we going to do?" Justine cried out in despair.

After Felix told Justine that the two of them would run away, they took each other's hands and ran to the ferry docks where they stowed on a cargo ship bound for District 11.

Once the cargo ship had docked, one of the unloaders noticed two little children stowed away in the bottom of the ship, looking pale, thin and hungry. Touched by their innocent faces, the man took the two children into his home. Felix and Justine, after getting fed and cleaned up, explained their situation to the family they were staying with. After contacting the mayor of District 11, the mayor decided that the two children could stay in the district for two years, until they were both five years old, then the Leonard twins would have to return home to District 15 as orphans.

So for two years, the Leonard twins stayed in District 11 and learned to work in the agricultural field. Both twins got foreknowledge of plants that were poisonous and plants that were edible to eat. Both the twins stayed out of trouble for the most part but both shared one specific fear: both Felix and Justine didn't want to go back home to District 15. So the evening before the twins were suppose to go back to District 15, Justine relayed her fears to Felix.

"Fee-lee, I don't want to go back home." Justine silently cried out.

"Justine, we aren't going back to District 15." Felix reassured her. "Instead, we are going to take refugee in any district that we can."

Over the course of her life, Justine had learned to never trust anyone at all. Justine knew that no one would care for a set of dirty twins, but both Felix and Justine knew that they had to try and make a new start in a district. So under the cover of darkness, the Leonard twins escaped District 11, unsure of which district would ever take them in. So the two twins started in District 12, not realizing that this district was Panem's poorest. So, arriving in the district, Felix and Justine took shelter in an abandoned shack on the edge of the district, deciding to wait until morning to see what the district would offer them.

Once morning broke, the twins left their shack to find themselves in an entirely different world. Everyone in the district seemed dirty and unwelcoming to the twins. So, the twins quickly ran away the following evening, not making plans to stay in the district at any rate.

So, the Leonard twins had taken hostage in pretty much every district in Panem for the next seven years. Some they stayed in for months, others for a few days. But every district they went to, each twin picked up new skills throughout the time they spent in each district. One thing remained the same; each twin stuck beside each other until the eve of the twins's thirteenth birthday.

That evening, the twins were in the forest camping out. Felix and Justine were planning to make their way to the Capitol when two men dressed in black grabbed Felix by his strong shoulders. He attempted to hold off the fighters, and Justine eventually helped take some fighters out, but it wasn't enough for one of the fighters gave Felix a tranquilizer.

"NOO!" Justine shouted as her brother was taken away from her.

Justine attempted to fight off the other men, but eventually it became no use to her as they had gotten too far away. So Justine, being broken, cried out her tears knowing one thing was for certain.

Running through the woods and surviving on her own for a month, Justine eventually reached a place known as District 5. One of the few districts that Felix and Justine hadn't taken solace in. Praying that the district would pity Justine, she explained her situation to the mayor. After much consideration, the mayor allowed Justine to stay. She finally had a home that could everything a girl like Justine would ever want. Except for Felix, whom Justine missed dearly.

At the age of 15, Justine was hired by the district to work as a spotter. Since Justine was an excellent climber, she found this task relaxing as it took her mind off of Felix and his disappearance. The district benefited from Justine's work highly, so she was offered a promotion which Justine hastily declined.

With other teenagers, Justine frequently participated in various games such as Capture the Flag. Most often, Justine was appointed the strategist for her team every time, and with each strategy, Justine's team found varying levels of success. Justine didn't have many friends, but she found it better that way.

At 17, Justine volunteered to participate in the Hunger Games in place of a twelve year old girl. The only thing Justine didn't realize was that her twin brother did the same thing in a different district.

This song describes the relationship of Felix and Justine Leonard after Felix was kidnapped and brought to their aunt in District 4.

It's been a long day without you, my friend, and I'll tell you all about it when I see you again - This line describes the four years that Felix and Justine were apart were very sad times for both twins, and they will never see each other until they have to go fight against each other in the arena.

I know we loved to hit the road - This line refers to the fact that Felix and Justine took solace in almost every district in Panem.

How could we not talk about family when family's all that we got? Everything I went through you were standing there by my side, and now you gon' be with me for the last ride - These lines refers to when Justine and Felix ran away all they had was each other, and they stood by each other's side for those long seven years. The last ride refers to the fact that the twins will be reunited for what could be their last days - the Hunger Games.

So let the light guide your way, hold every memory as you go and every road you take will always lead you home - These lines refer to how the twins have to cope now that their other half isn't with them.

- The White Games by Lightstone123

Retrieved from "https://thehungergamesrp.fandom.com/wiki/Justine_Leonard?oldid=187041"
Community content is available under CC-BY-SA unless otherwise noted.