Everything below this point is old and will be updated.

Markey Primal-Omega is a tribute from District 14/2 made by EvilhariboMadness. He is a victor in District3's Ultra Fast Games!, when he was District Seven.

District: Fourteen/Two (depends on the games)

Personality: Markey is twisted and plain evil. He likes nothing more than making someone suffer for a long amount of time. He's cold and mean to everyone...no one gets to see his "kind" side...if he has one. Over the years, he's grown an obsession for blood, and loves to cut someone, and lick their blood off his blade, right in their face. Rarely, but it's happened, he would actually go and suck their blood straight from their cut. He's manipulative towards most people, and enjoys people in pain. 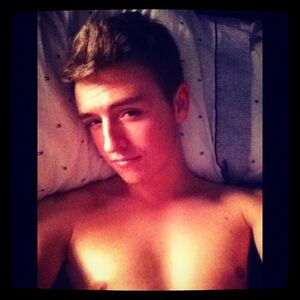 Weapon: Markey uses two weapons mainly. Those are a tomahawk, and a crossbow/bow and arrow.

Strengths: Markey has a talent for killing people silently and slowly. His physical strength is quite high, and he loves to bring down his tomahawk with full force on people (imagine Assassins Creed tomahawk kills). He also has a thing for planning ahead greatly, so his mind power would aid him in the games.

Weaknesses: Markey's personality is a major flaw of his. Yes he can deal out the comments and such, but he can't take it. He can't use a sword or a spear. He needs things that can nimbly move in his hands: i.e. the tomahawk as it's small, and the crossbow/bow as he likes the grip. He can't run that fast surprisingly, yet he can move quite secretly and tends to stick to the shadows. A major draw back that he hates, is the fact that he can't climb all that well.

Backstory: Horace and Kyletta Primal-Omgea never thought that sweet little Markey would turn out to how he would become. Yes he was the 8th born of 9 kids, and was often neglected, but surely, he couldn't work up the courage to kill an entire family. For one thing, he was shy and sweet, always laughing at the little things people did, and he was adored by his older sister, Crytia. Cytia, and his younger sister Minnie, would become the only two people he would care about. But even then, they'd be in death's reach.

Markey's lust for blood began when he was 8, and when he felt like he needing to do said thing. One day, he was hungry. Starving. His family, excluding him, had gone away to the other side of the District for awhile, leaving him at home with his aunt, who was almost always out. Still being straving, he saw his family's kitten rub her head against his leg. If you ask him what he did, he'd claim it one; never happened, or two; it was a blur (he'd only say it, if the person who asked him had proof that he did it). He took a nearby knife from the kitchen, and stabbed the kitten to death. This was the also the first time he licked blood and kinda liked the taste of it, and the first time he turn to cannibalism. Only minutes later, would he do the same to the family's puppy, this time, cutting it, and licking the blood of the blade as the animal watched, silent and frozen in fear.

Of course, his aunt came home to find her eight year old nephew with a bloody knife in his hand, and two different locations of blood on the floor, she went hysterical, calling peacekeepers and such. This was the first time Markey would panic and kill someone, and be the first time he killed someone. He took the knife to his Aunt, and slashed her back first, skin looking like floppy strips. As she was screaming out in pain. He then kicked her to the ground, and sliced her neck slowly. Now with another body to deal with, along with the puppy's body, Markey hid them in his room, and day by day, he'd eat another part of the dog, until it was gone. With his aunt's body, he burned it, till nothing but ashes remained.

When the family returned home from their trip, and found peacekeepers accusing their son of murdering Kyletta's sister, and the family pets, Crytia and Minnie were quick to defend him. The peacekeepers then blamed it on their aunt, and the case was dropped.

On Markey's first reaping, Crytia was reaped at the age of 13. Not one of his sisters; Revenge, Annelidia or Martynna, volunteered for her, leaving him enraged, replacing the former feeling of shyness and insecurity. He wondered if his brothers would do the same to him, and came to the conclusion that they wouldn't, and he hated them even more. When she died in the bloodbath, he vowed to avenge her death, by killing his family, excluding Minnie. The first to die was Revenge. Markey killed her by stuffing a lit match down her top, causing it to catch alight. In the case that she could escape her death, Markey locked her in a room, in which caught fire also, killing her either way. Argon died next, and could be called one of the more sinister deaths that Markey had caused. Their mother had about one hundred needles, due to her extensive love for sewing. On his death night, Argon was sleeping when Markey came into his room, and insterted each needle into a different part of his body. Once all the needles were in place, Markey twisted them around, lots, so that Argon would feel the pain. Argon, being too proud to scream for help, just watched as his little brother took a needle out, and licked the blood off, before jabbing the needle into his left eye. Markey smirked as his brother was blinded in one eye, so much, that he did the same to the other eye. Slowly, Argon died of blood loss, due to Markey repeating his steps over and over, many times.

The next deaths were Annelidia and Martynna. Their deaths happened on the next two nights, but were the exact same. Both were chocked by Markey, both begged him to stop, but only Martynna accepted her murder, and knew why Markey was doing this. Martynna was the only one, in all of his sisters, to apologise to say the least. Annelidia cursed her head off at him, and went to far to slap him, which resulted in her neck being closed up quicker than Martynna's. Ry was the next dead. Markey would enjoy this kill the most, as he hated Ry's guts. He managed to get into a fight with Ry, and coax him outside, where he had set up a trap, that would land a large brick on Ry's head, smashing it. Once that was over, Markey put a finger in his brother's blood, and licked it clean, his new found lust for blood growing.

The final deaths were the ones that didn't rely on himself doing the work. Since the murder of his aunt, Markey had abused her dogs, made them cower in fear when they saw him. He taught them commands to kill people upon will, and gave them the best treats if they did. His final kills were his remaining brother Jyrden and his mother. He watched with very small remorse as the dogs ripped his family to shreads. His mother's last words to him were, "You're sick and twisted. I hate you."

These words only comfirmed what he had felt for years on end. Once the peacekeepers knew about this, they investigated the remaining family; only Horace, Markey and Minnie, finding Horace as the only real suspect, and killed him. The other two were sent to live with their grandmother. When he was 14, he ran away from his grandmother's house, to continue his killing ways. One beautiful girl he planned to kill added a new way of torture. He befriended her, before pulling her into an alley and raping her, at the same time, cutting her. This was the first time he showed his "signature" way of signalling his victims' death, the licking of the blood from the blade. The girl watched slowly as he brought down his knife on her. Her, like some of his other victims, he ate, due to his hunger from being homeless. Only days after he had killed the girl, the peacekeepers approached him, and told him that his father was found guilty, and that the real murderer was either himself or Minnie. He told them that he'd tell them who did it, as he knew, tomorrow. That night, he got every single piece of evidence that he had hidden, and hid them in Minnie's room, framing her. The following day he told them that she was the one who killed them all. As the evidence against Minnie was too high, they had no choice but to kill the 13 year old girl.

For the next four years, Markey would kill and rape and torture many people. At the time of his volunteering, he had killed more than 40 people, raped over 50 girls, and tortured more than 100 people. Markey always believed that it was quality, rather than quantity. The causes of these large (ish) numbers? Markey believes that everyone in the District just watched as Crytia died, just sat and watched, and he wants revenge, lots of it. Each time he did such a thing, he blamed it on a person who he had planted evidence against, sealing their death. Even at these deaths, he licked his clean blade, again, to signal their death that he had caused. When he was 18, he decided that the little fun he got in his district bored him, and he volunteered for the games, not being able to contain his lust. Whilst volunteering and whilst in the games, a deadly smirk should be present at all times.

Token: All of the siblings of the family got a stone, his was a sapphire. His token is a necklace with his stone, Crytia's stone (an emerald), and Minnie's stone (a topaz), all together in a rough heart shape.

Retrieved from "https://thehungergamesrp.fandom.com/wiki/Markey_Primal-Omega?oldid=223585"
Community content is available under CC-BY-SA unless otherwise noted.